Writing Your Congressman Does Not Work

7/15/15 UPDATE: This article has been substantially changed since its original publication three years ago. Grammar has been heavily edited for clarity, and the material that has been added, if anything, only reinforces the proposed hypothesis.

Most alternative media websites instruct their audiences on how to write to “their” Congressman, all the while pontificating the virtues of its alleged efficacy. Such fallacious advocacy permeates the remnants of the free press, most of whom actually know better, but for some inane reason, persist in recommending to others that they should waste their valuable time and effort on a technique that systematically fails to deliver measureable results in the cause for liberty. Believing in the civic fairy tale that politely requesting a legislator, who imagines himself to be your ruler, to abide by his oath of office through opposing unconstitutional legislation, is just as constructive as thinking that cancer can be inexplicably “reformed.”

Legislators are not constitutionally required to accept your mail, much less answer you, or otherwise perform whatever you wish them to do. Just because citizens have a constitutionally recognized ability to petition the government for a redress of grievances does not therefore mean legislators have a corresponding duty to respond back to you. Any responses you receive back from any of them should be considered within the bounds of polite etiquette.

Consider also the difficulty of proportionality experienced by these congresscritters. In 2013, the total United States population of voting age (that is, over 18-years-old), was approximately 243,703,099 people, and the total Texas population of voting age that same year was projected to be 19,518,666 individuals. If you know that the entire United States Congress has only 535 voting members, and that the entire Texas legislature has only 181 voting legislators, then what this means is that the ratios of “representation” can be calculated out to be 1 congresscritter for every 455,519 U.S. citizens, and 1 Texan legislator for every 107,837 Texans.

Obviously, in light of these ratios between legislators and citizens, it becomes literally impossible for every letter received to be answered; thus, an automated process was born. What happens is that the legislative staff categorizes letters into a dichotomous typology of “pro-whatever” and “anti-something,” types your name at the top of the pre-written standard form letter, and returns that to you. This is all based on the assumption that the congresscritter’s staff got not only the subject matter correct, but also accurately recorded which side of a political issue you were on in the first place. Yup, that’s right – it’s been well-known by those who have worked inside the legislative branch of government that such “mishaps” as these are all too common.

The truth of the matter is that writing to a politician is, in fact, a purposefully designed confidence trick. You are supposed to emotionally invest yourself in the notion that “your” congresscritter represents your interests, where, truth be told, they just don’t give a damn. Every minute spent on the working inside the system in order to change it from within (that is, the political means of making money), is every moment not being spent on doing something actually productive towards making humanity freer.

Contemplate also the implications to your privacy should you ever write a congresscritter. They’ll have your mailing address from the envelope, and quite possibly enough information from your letter with which to unjustly profile you as a political undesirable. As long as they don’t accuse you of “terrorism,” then perhaps writing congresscritters, although it incurs opportunity costs, shouldn’t land you in a government dungeon.

Being the good scientist I am, I decided to conduct my own experiment of sorts by writing some congresscritters on two different political issues. In 2013, I opposed both CISPA in the federal Congress and the grandparent access legislation in the Texas legislature. The postcards I sent to the applicable congresscritters, as pictured below, were much less time consuming than if I had written letters and then placed them into envelopes, as well as being much more privacy-friendly. 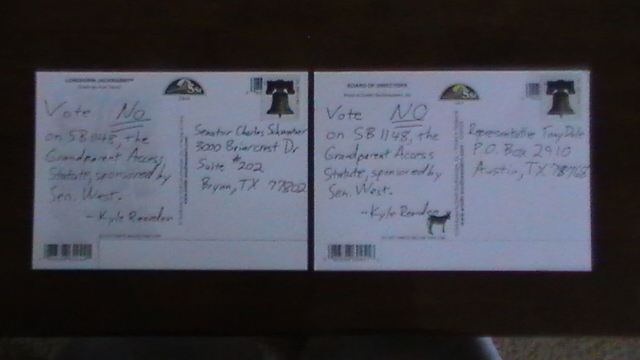 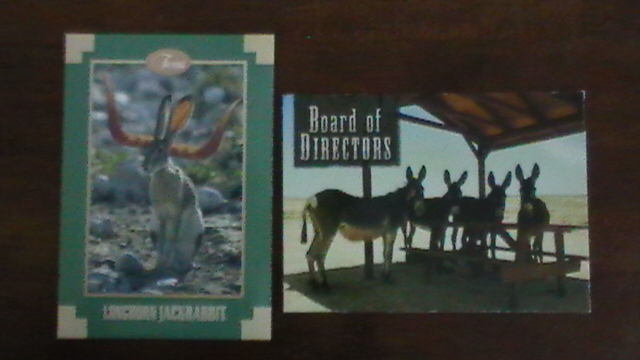 Thankfully, CISPA died in committee, as was the similar fate with the grandparent access statute, yet Fight for the Future has recently warned that CISPA is not dead. I think this shows exactly the problem with writing congresscritters at all – even if your letter is correlated to the fate of a bill, there is nothing preventing the same legislation to be packaged differently and passed into law at a later time. Unless you are willing to dedicate yourself into becoming a watchdog, there is absolutely no way for your average Joe to keep on top of the legislative branch for any American government.

There are, however, some slight exceptions to the historical observation that writing to a congresscritter does not work. They are:

For those who can’t bear to not write “their” congresscritter, the next best thing is to mimic my example by sending brightly-colored postcards, scrawled with pithy statements either in support of, or opposition to, a particular bill. Better yet would be to ask them stupidly polite questions wherein any real answer would betray the façade of their very “representation.” Such uncomfortable questions and any subsequent replies should be published in corporate media newspapers, as well as any alternative media outlets, that care to expose the opportunity costs and hypocritical futility of reformism itself.

This entry was posted in Dissident Methodology. Bookmark the permalink.

2 Responses to Writing Your Congressman Does Not Work