The True Story of the Bilderburg Group

In order to construct the Establishment in the first place, there must be significant efforts in planning how to seize, maintain, and expand power. While traditional think tanks are designed to brainstorm how to implement such plans, goals have to be formulated beforehand. The various Round Table groups, inappropriately labeled as “secret societies,” conjure their policy goals into existence, ultimately relying on their puppet governments to forcibly implement their machinations on the unwitting citizenry. 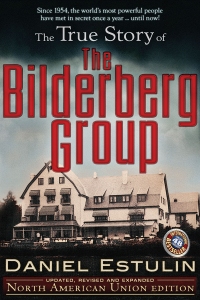 Daniel Estulin’s investigative expose into proving the existence of the Bilderburg Group is nothing short of phenomenonal. Finally, the lapdog mainstream media can no longer propitiate their ignorance like a badge of honor; even they’ve had to admit that the Bilderburgers do, in fact, exist. Now that that initial hurdle has been overcome, any further claims based on the notion that people who already knew of the Group’s existence are somehow wackjobs or “conspiracy theorists” is irrefutably proven to be intellectually dishonest.

If approximately 150 of the top Hollywood celebrities attended a closed-door conference held over a weekend in a location where the highest security measures are being taken, the mainline press would move heaven and earth in an attempt to infiltrate it and try to find out what the hell is going on in there. But if the same number of the most powerful individuals from the spheres of government, oligopolized industry, high finance, and even the mainstream media itself do the same thing, not only is mum’s the word, but the sparse inquires (until now) have been met with explicit denials that such a conference is occurring in the first place. Considering just how intrusive celebrity gossip “reporters” are, then why the double-standard?

The Bilderburg Group subscribes to the Chatham House Rule, which was developed by the Royal Institute for International Affairs. This Rule, in essence, provides attendees the ability to speak freely as individuals, and not as representatives of their organizations, by never allowing their identities to ever be revealed. Ironically, such secrecy on the part of non-governmental attendees (at least) inherently violates the Logan Act, which prohibits private citizens from attempting to unduly influence diplomatic relations between the United States and foreign governments.

Unfortunately, what is commonly known about the Bilderburg Group’s activities suffers from spotty reports. While it is possible to obtain leaked documents (such as the all important attendee list), most of the whistleblowers are temporary support staff (such as waiters). This unfortunately renders accurate recollections of crucial conversations among the Bilderburgers subject to the failures of memory as well as gap filling speculation, which attempts to pass itself off as reliable geopolitical analysis (for example, how many times have alternative media figureheads pontificated about the attendees wanting to finally attack Iran?).

Despite these limitations, it should still warrant enough concern that very powerful people are having highly secretive closed-door meetings with domestic AND foreign government officials, all of whom are tightly guarded by various rings of both public and private security personnel. Setting aside the contradiction posed by the Chatham House Rule and the Logan Act, why wouldn’t any real reporter, or any citizen for that matter, be interested in what is being discussed by what seems to be some of the global elite? Perhaps the Carnival of Distractions, as promoted by both the mainstream and (most of) the alternative media alike, is the culprit responsible for the age-old military technique of confusing your enemy.

I’m glad that Estulin tackled the Council on Foreign Relations and the Trilateral Commission. These other Round Table groups serve different purposes from the Bilderburg Group, and each other, but it should not be surprising that there is a core pool of overlapping attendees to these various groups. Power is addicting, and political power specifically enables psychopaths the ability to wield the power of life and death over millions of people with near total impunity.

Even though this book’s focus in on proving the existence and (to some degree) the activities of the Bilderburg Group, I hesitate to criticize Estulin for not postulating some potential remedy, except for the fact that he does. Estulin asserts that by exposing the Group, the common rabble will somehow fix everything; it is not a stretch to say that Estulin has a major hard on for democracy. Additionally, he mentions the necessity for open discussions alongside a social movement, yet by confusing free inquiry with an ineffective (yet symbolically violent) political ideology that is at odds with Liberty, he conveniently overlooks just how easily manipulated democractic processes are by the Bilderburg Group.

Besides encouraging his readers to engage is constructive debate, the only other smart suggestion that Estulin offers is to “turn off the television.” Had he followed up on that recommendation for how to study the predictive programming elements in cinema, Estulin could have helped get more people active more quickly; but, of course, even discussing that subject would be outside the scope of his book, and he would likely feel the need to prove his case first, as is the typical inclination of nearly every government watchdog.

In the final analysis, this is otherwise a fantastic investigation into the Bilderburg Group. Dissidents who are already familiar with Round Table groups can glean some insight into the behavior of the enemy from it. Sadly, for those very same political dissidents, this book is also an attractive bookshelf nick-nack that I doubt will be referenced regularly for its complete lack of pertinent tactics and strategies for bringing down the Establishment.

This entry was posted in Literature Reviews. Bookmark the permalink.

1 Response to The True Story of the Bilderburg Group