All of us suffer from statism. It is a malaise that seeks to deprive us of our property, liberty, and ultimately our lives. Therefore, it would behoove us to refocus public discourse on those subjects that affect us the most. 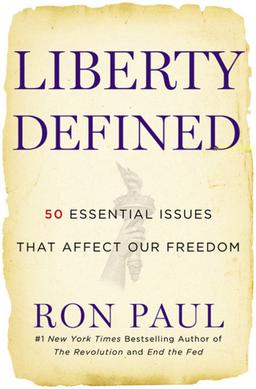 Liberty, as defined by Dr. Ron Paul, is the exercise of one’s own inalienable rights so long as such exercise does not initiate coercive aggressive upon others doing the same. It is trusting in the spontaneous order of the free market that naturally functions whenever there is no forcible intervention by the State. The good doctor even admits in the introduction that he does not intend to present a plan of any kind for achieving the ends he claims to want to manifest, but instead he purports to write a more philosophical treatise of sorts on a variety of what seem to be randomly selected topics (didn’t he already do that with The Revolution: A Manifesto?).

Here is a snapshot of the 50 issues from Dr. Paul’s book (of what are essentially 50 essays) where he argues that:

Abortion is not to be provided by doctors who sincerely think they would violate their Hippocratic Oath if they did so.

Regime change via assassination by government spooks is bad.

Bipartisanship is inimical to our liberties.

The business cycle is caused by central banking.

Regulating elections infringes on the liberty of free speech.

Julian Assange should not be executed by the State.

The CIA should be abolished.

Forcibly drafting youngsters into the military is bad.

Creationists & evolutionists want to use governmental force upon each other in the public schools.

Climate change is a scam, and so is cap & trade.

Keynesianism originated from the pit of hell.

Prohibition of anything not only does not work, it’s also immoral.

Atheists, for all of their militancy, can be quite evangelical in promoting atheism.

I found the good doctor’s statements regarding the State’s primary role in monopolizing the providing of security services as quite intriguing when he said:

“If we reflect on how security works in the real world, we discover a huge and important role for private enterprise, and we find that the vast government apparatus of ‘national security’ does not keep us safe so much as threaten our liberties by regarding the entire citizenry as a threat. Private security does not threaten our civil liberties, but government-provided security does.”

While his analysis of government police and the like is fundamentally correct, where does he get the notion that “private security does not threaten our civil liberties?” How is he defining “private security?” Is he referring to DynCorp, Raytheon, or Academi? Aren’t they “private?” Or is he referring to the mom-and-pop-type operation that provides security guards for the local mall? I couldn’t find any clarification on that from his essay, so I’ll give him the benefit of the doubt and presume the latter, since it would be unkind of me to presume some sort of nefariously devious intention on his part by being so vague. Isn’t Ron Paul against the military-industrial complex anyway?

I do take issue with Dr. Paul regarding civil disobedience. Where the hell does he get off asserting that as long as it’s “non-violent” then that magically makes it somehow morally acceptable? Apparently, the good doctor has forgotten that Thoreau based the philosophy of civil disobedience upon the right of revolution, which by definition is inherently violent, given that it is a form of collective self-defense (much like how the Law is). Typical of Patriot Rockstars and Messiahs alike, Ron Paul asserts that:

“Violence is a terrible agent of social change… the vast majority of Americans detest the mere thought of violence as a legitimate tool for bringing about political changes… [some] endorse the principle of peaceful civil disobedience as a means for bringing about political changes… civil disobedience is a form of personal nullification of unfair and unconstitutional laws… [it] is a process whereby the weak and defenseless can resist the violence perpetuated by the state [emphasis added].”

According to that line of reasoning, then the guerrilla partisans of World War II should have just done sit-ins, street protests, and “speaking out” instead of shooting the armed government agents from the hostile foreign military that occupied their respective countries. For some strange reason, self-defense is suddenly off the table; look who changed their tune from End the Fed. Of course, Dr. Paul hides behind the fact that the secret police like to bust political dissident groups, ergo he wholeheartedly subscribes to the line that only agent provocateurs “advocate for violence;” such pacifism is detrimental to securing our Liberties. This is completely neglecting the normal human response to deter and forcibly repel coercive aggression by criminals, both public and private.

Weirdly contrasting this is Dr. Paul’s opposition to gun control when he states:

“Your safety has always, ultimately, been your own responsibility, but never more so than now. People have a natural right to defend themselves.”

So, is self-defensive violence morally acceptable or not? Is he making a finer distinction of some kind? Is killing a violent mugger perfectly fine, but not the right of revolution? What’s going on here? As one fictional character infamously stated:

“Contradictions do not exist. Whenever you are facing a contradiction, check your premises. You will find that one of them is wrong.”

I think such is likely to be the case here, and not just with the right of revolution or individual self-defense.

Ron Paul’s Liberty Defined: 50 Essential Issues That Affect Our Freedom seems little more than an attempt to bolster support for his 2012 presidential campaign. It more or less regurgitates the content of The Revolution: A Manifesto; if anything, it seems to be an initial draft version of that earlier book, albeit in an essay format. The one good thing I’ll say about it is that is does provide you with everything else you ever wanted to know about Dr. Paul’s opinions regarding such football issues like abortion, creationism, and marriage. Other than that, there is literally no plan of action (as the good doctor himself admitted) or anything else pragmatically useful, but that kinda makes sense since this was an alphabetically disorganized philosophical treatise that attempts to persuade the reader of the horrendous nature of government. Seeing as that was the real goal, I would rather have the greenhorn Ricky recruits read The Revolution: A Manifesto if for no other reason that for brevity; for the rest of us, Liberty Defined is little more than a masturbatory session of head nodding in agreement with the awfulness of tyrannical government.

This entry was posted in Ron Paul Lovefest. Bookmark the permalink.