Self-preservation is a fundamental value held by all creatures. All rights, liberties, or any other notions of freedom are only guarded by the willingness of individuals to use physical force against criminals and tyrants alike. Anyone who prefers instead to engage only in non-compliance by pretending that that alone will somehow protect him from the ravages of the enemy is either deluded, or worse, that he does not value his own life. 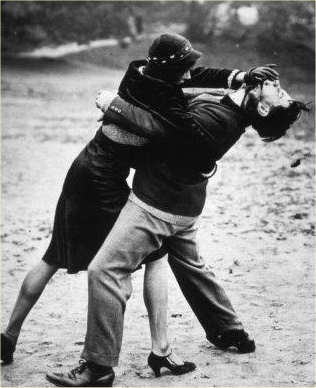 The Non-Aggression Principle (NAP) is a moral value which holds that the initiation of coercive force is not only illogical, but also by extension, immoral; however, self-defensive violence on behalf of yourself (or even another individual) is allowed since it is the physical repudiation of evil. According to the American Bill of Rights, the Second Amendment (2A) states, “…the right of the people to keep and bear arms shall not be infringed.” Even Henry Thoreau in is infamous treatise On the Duty of Civil Disobedience stated that, “All men recognize the right of revolution; that is, the right to refuse allegiance to, and to resist, the government…” Whether it be the provisions of 2A, the NAP, or the right of revolution, pacifism is throughly repudiated by any legalistic or moral yardstick that takes the preservation of an individual’s freedom seriously.

Self-defense is recognized and practiced in the natural world. The universe is in constant conflict; just observe the behavior of single-celled organisms, the fish in the sea, and cosmic bodies smashing into each other. A Navy SEAL instructor once said, “Look at the rabbit when it is taken by the wolf, or the wolf that gets its foot stuck in a trap. The animal does not feels sorry for itself. It never feels sorry for itself.” One must have claws the way that cute, little kittens have claws. They playfight to prepare themselves for violence. Tiny cats do not complain to anyone that no one should speak of violence for the simple reason that violence is real to them. They have not been duped by being fed the false opiate of “peace.” Only abused animals give up. So long as men have free will, there will always be fights, and thus, there will always be warfare. What has broken the will of many political dissidents to fight?

Unfortunately, it would seem that the domestication of those who would have been willing to fight for their Liberty has taken firm root, thanks to the demoralizing rhetoric of the Patriot Rockstars within the Carnival of Distractions. One unnamed libertarian replied to an inquiry by JB Campbell regarding the use of self-defense:

“First, there is no reason to talk of violence as a solution, as violence can only be justified in real self defense. My belief is that any and all peaceful dissent should be practiced at all times. Anything other than a non-violent approach will always end in disaster as it has always has. In the case of America, there are close to 300 million of us, so it wouldn’t take much to turn the tide….I do know for certain that your way will fail miserably, and if it succeeded, we would end up with military rule. At that point, all would be resigned to force and violence, and there would be no winners, and no freedom.”

Of course, JB Campbell replied with the following:

So, how was this unknown libertarian influenced to somehow believe that “peace, freedom, and prosperity” were somehow complimentary values? Perhaps it came in part from the Rockstar utterances of Lew Rockwell:

“If you’re in any kind of a group, any kind of a libertarian group (this [agent provocateurs causing trouble] even happens in reading groups), and there’s somebody coming in there advocating violence, toss him out. Even if he’s not an agent of the State, he’s evil, you want nothing to do with him” [emphasis added]. – The Lew Rockwell Show, episode #315

What strikes me as especially strange about all this is that it directly contradicts the classical liberal tradition of protecting your property by force. Even novels of libertarian revolution illustrate the serious reality that we must all contend with by virtue of the fact that we exist. I also find it quite telling that very few political dissidents are emphasizing that what is needed more than anything else is the reinvigoration of the virtue of COURAGE, which it and of itself, requires the taking on of risk (I hope that the anarcho-capitalist entrepreneurs can at least appreciate that). Part of what I think is happening is that the libertarian anti-war stance is being confused as also condoning some sort of anarcho-pacifism, which of course violates the Self-Ownership Axiom that libertarians hold so dear.

Considering that the Founding Fathers were the only ones to have actually launched and won the only truly libertarian revolution in history, it would stand to reason that at least one of them had something to say about the virtue of self-defense. Samuel Adams told the Boston Committee of Correspondence on June 27th of 1774:

“A Grecian philosopher who was lying asleep upon the grass was aroused by the bite of some animal upon the palm of his hand. He closed his hand suddenly as he woke and found that he had caught a field mouse. As he was examining the little animal who dared to attack him, it unexpectedly bit him a second time, and made its escape. Now, fellow citizens, what think you was the reflection upon this trifling circumstance? It was this: that there is no animal, however weak and contemptible, which cannot defend its own liberty, if it will only fight for it.”

“The use of force to resist arrest or search is justified:

(1) If, before the actor offers any resistance, the peace officer (or person acting at his discretion) uses or attempts to use greater force than necessary to make the arrest; and

(2) when and to the degree the actor reasonably believes that force is immediately necessary to protect himself against the peace officer’s (or other person’s) use or attempted use of greater force than necessary.”

What is earth shattering about this statute is that it says that, in Texas, police brutality itself is illegal, and also that the citizen being harassed by these blue costumed thugs reserve the liberty to forcibly resist by whatever means necessary. Gary Hunt comments:

“What gives a ‘peace officer’ the right to take a persons liberty, or property? Obviously the Texas legislators realized that excessive force could be used, unlawfully, justifying lawful retaliation. Perhaps they understood human nature and knew that personal bias might play a part when one person, operating under color of law, might exceed lawful exertion of force. Understanding that abuse of power might occur, isn’t it possible that both time and extension of power might result in ‘law enforcement’ officers exerting an authority that is beyond lawful authority?”

Maybe if Antonio Buehler had taken that to heart, he never would have been arrested by the Austin Police Department in the first place.

Some of the anarcho-capitalists want to socially engineer their way out of tyranny, such as by not spanking their children. While I can appreciate the out-of-the-box thinking that libertarians are known for, it is this very lack of respect for self-determination that has perpetuated the tyranny we are all suffering under. If Victory over the Establishment is to ever be achieved, then laissez-faire has got to mean something.

If you are a warrior, you will come to terms with this reality. The only way that you can work towards peace is when you sign up with Ray Kurzweil, when you say, “Yes, plug me into the Borg; I do not want free will anymore. I do not want the free will to kick my neighbor in the teeth, just because I feel like it.” You may not do that, but he may decide to do it to you. So, what you going to do? Are you going to get a protest sign, or write your Congressman? If he really wants to, neither is going to stop him. No, the only way that you can prevent someone from hurting you is to be a warrior by preparing for violence.

With regards to training yourself how to deal with violence, there are some initial steps that you can do. I would first suggest that you mentally visualize how if an attacker were to strike mano-a-mano just as you walk into the next room, what exactly could you grab within reach that could serve as an improvised melee weapon? What could be pressed into service as an impact or penetration weapon, what furniture could be used as cover or concealment; also, what could be a distraction thrown at your opponent? Hypothetically postulating different scenarios to yourself is invaluable for mentally preparing for combat.

Understanding the physiological stresses of combat is integral towards preparing for dealing with it. As it is mentioned over at the Internet Armory about How a Bullet Deters an Assailant:

“A bullet may be effective in incapacitating an aggressor by any of five mechanisms:

Real life combat is not at all like those action films littered with predictive programming. The sheer synergistic physical and mental stresses placed upon you in actual combat are going to be among some of the very worst experiences of your life; however, you need to be able to struggle through and cope with it due to the exigencies of your own predicament. Consider also the aftermath of a lethal force encounter with all the emotional and potentially legal consequences that could ruin your life, one way or another.

If at this point you don’t think you have the stomach to kill (or at least injure), then you need to more precisely determine under what circumstances you would be able to. Do you simply have more tolerance for criminal and/or tyrannical behavior, or is it simply that you need more technical training (such as marksmanship drills, reading military strategy, sparring practice, etc)? It is making decisions like this that separate responsible adults from those who suffer from the victim mentality.

You cannot have peace so long as you have free will; so, prepare for warfare. Study warfare. And I am talking to the men. I am not talking to the candy-asses that want to go back to their cotton fields. For those who prefer to remain domesticated, I hope you enjoy working those fields, since by doing so you admit that you are slave, because you want to be a slave. You are not going to challenge the tyrants who poison and stomp innocent people into the ground. If somebody wants to hurt you they will hurt you, if they really desire to do so. The only way that you can prevent them from doing that is to have the willingness to hurt them back. My liberty is too precious to me to squander it on the promises of voluntaryist daydreamers who want to mystically proselytize their way into the anarcho-capitalist utopia; part of the essential value of being a libertarian in the here and now is to survive and thrive despite the State, not because of it.

This entry was posted in Dissident Philosophy. Bookmark the permalink.